Rehabilitation has many meanings to many people, it also has many definitions. As I am writing from a criminal justice perspective I feel that the following definition is the most relevant.

Who feels that is happening?

As someone with a few sentences behind him, spread over a number of decades, from the age of 15 to now, from the age of ten if we take my first involvement with the criminal justice system rather than my first sentence at the age of 15 where subsequently I spent my sixteenth birthday, two years later I was to also spend my eighteenth birthday in jail as well. I’m not asking for sympathy as I deserved everything I got, but what my purpose of highlighting of those facts I hope will serve, is that readers will hopefully understand that I may know a thing or two, good and bad, about the system. So much so that I put all those years of experience together on my last prison sentence in order to utilise what I knew was out there, but also knew, from in prison, I would have to do the majority of it myself. Rather than myself explain it all again please read Through my eyes. A blog I wrote a while back explaining my reasons for going back to prison and how I orchestrated the subsequent hearings to my advantage, again done in order to turn my life around, as was risking a life prison sentence so I can achieve my aims.

My holistic and individual rehabilitation started the day I was driven through the prison gates on day one of my remand. A lot happened on my last sentence, I’m happy to report only one negative which I learnt from, as a good friend, Rob said to me once “You can never lose, you either win or you learn. I embarked on a degree in criminology and psychological studies with the Open University. I did this for three main reasons. The first was because I could and I wanted to, plain and simple as that. Due to my lack of school education I was advised to take an access module first , applied for and received funding from the excellent Prisoners Education Trust. The second reason was I wanted something worthwhile to fill up my time as I knew, even though I had yet to go further than a virtual court, I was looking at a long time and set about preparing for it. The third will take a little bit more explaining. I knew what I want to achieve in my future from that day, no one could say anything about my experience, it’s there in black and white for all to see. However, one thing that could have been thrown in my face, as I look to improve my life, is, okay you have the experience but what qualifications do you have so you can use that experience in the right way, ta daaaaaaa!!!!

You see the point I am trying to make is that no matter what I do, did or will do, society will never fully allow me or people like me, to feel as if we are rehabilitated. The main purpose of prison is to hold people who have been punished in order for them to take a look at their life and choose to change it or face further consequences. I agree, in the words of ‘Porridge’, “some see prison as an occupational hazard”, I did!, and no doubt will never change, although I am. Which brings me onto another issue. If you followed my timeline in life, I would hand on heart say you would notice a complete change in my thoughts, feelings and behaviour. It is as plain as the nose on the end of your face that I have been genuine from day one in my claims.

I can’t deny how fortunate I was that my local prison, HMP Norwich believed in me from day one also, in fact on my arrival I had a brief meeting with the duty governor to outline my plans for my future. This same governor approached me one day, seven months later, and said how refreshing it was that he is hearing good things about my name, he respected I was a man of my word, especially in that environment. I am ashamed to say that I took his words with a heavy heart, because although my intentions at the start of my sentence were still progressing, I had stupidly saw an opportunity to make money using my many roles within the prison. I had purposely gotten myself involved with drug trafficking within the prison. As anything in prison, you only get a temporary run however much your ego tells you that you won’t be caught, you will, one way or the other. It’s the law of averages plus added to that you have to be lucky every single time, they only have to be lucky once.

So here I was, halfway through my sentence and totally messed it all up due to greed and ego. I’m not going to say exactly what I was up to but believe me when I say people were never reluctant to come to me to see something through. I was an arse, what had I done. To make matters worse, the day it came on top, I had received my D cat, which bizarrely wasn’t conducive to what I was trying to achieve, that point was now mute as I was transferred back to B cat conditions and placed on Basic regime for 5 weeks. I was devastated, I hated myself and lay in my cell for days. An officer from the safer custody department came and had a very long, emotional chat with me, I explained the situation and that I just wish I could have another opportunity, I was stupid, I was biting the hand that I had chosen to feed me, it taught me one huge lesson, you can’t be a hare and a hound. 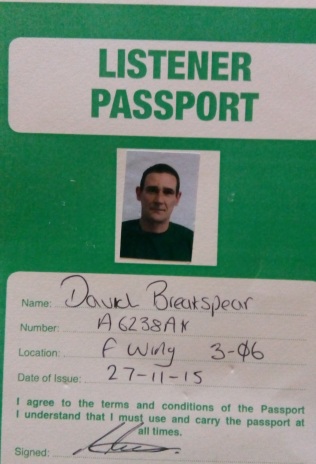 It was to turn out to be one of the best conversations throughout my sentence I had , Miss S, thank you I will never forget it, .I was given another chance and neither myself nor the prison looked back. I stayed in B cat conditions until my release and actually got my D cat back 9 months later but asked not to be given it due to the detriment it would have on my progression at that stage, plus I was also co-working on a new curriculum for the education department, and also working on a resettlement programme based on the work I had done myself.

Like I said the prison system, well HMP Norwich were fantastic in the support that they provided me with, I say support it was more allowing to crack on with what I was doing.

Everything was running well at this stage, my progression, the curriculum and the new course I had designed. My degree was progressing nicely with some impressive scores on my assignments, so much so, I am running a collective score of 84%, with the OU it’s 85% for a 1:1. I had also signed up to a radio resettlement course with an outside agency who visited the prison to facilitate the 5 day course. Future Projects, especially the operations director Laura Bloomfield had and have since been an integral part of my successes. It was agreed at the completion of the course that Future will provide a through the gate service for me.

This was despite the probation service dumping me in a hostel a few hundred miles away from where I have my support network, I have said more than enough previously about all that. My point about probation is basically they treated me as David Breakspear the man who went to prison and not David Breakspear the man that was being released from prison, and not someone who just talked a good game either, as some of the pictures I have included point out. It felt as if all my hard work to rehabilitate myself had not only gone unnoticed but also meant nothing, was that fair considering what I had achieved? Yeah I had messed up half way through but this was nothing to do with that and I had shown by my actions that I had learnt. 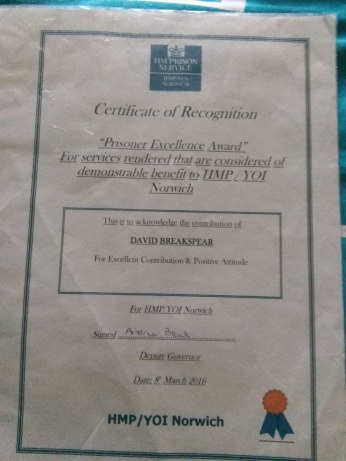 I was released from prison on the 9th June 2017 am I rehabilitated according to the definition at the start of this blog? It’s Thursday 2nd August, 2:15pm to be precise and I am writing this blog from my room at a move on hostel where I reside, and have done since the 26th August 2017. One way for me to get accommodation I have been told, is to see out the maximum time of 2 years here, be evicted, become homeless and hope the council will help. Everything I have been doing has all been to achieve my own rehabilitation goals, apart from Future Projects and, ironically, the prison no one seems interested in rehabilitation.

The problem with the system is that there is no synergy and everyone involved appear to be working towards their own agenda or the agenda of their paymasters. In order for rehabilitation to be able to take proper effect, it has to include all.

Does prison work? yes it does, does rehabilitation work? given the right resources, the motivation and the environment to do so then yes but only if everyone is singing from the same hymn sheet, which includes the media and society as a whole.

Follow Journey of a reformed man on WordPress.com
Join 2,862 other followers